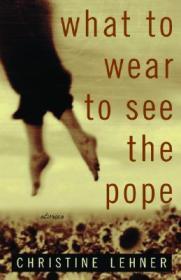 Twins, Again (an excerpt from a story)


I had always wanted to have a twin -- even before Catholic school -- so the results of the laparotomy did not surprise me as much they did the others: my family, my friends, strangers on trains. Perhaps I should rephrase: I would have liked to have been one of a pair of twins.

Mary and Maud O'Kelly were twins in a family of eleven, and for six years they were my most envied classmates at St Paul's School. I first attempted to be friends with Maud, but finally only Mary would have me. And that was not what I really would have liked: what I wanted was to be inside one of them, to have an other who knows the best and worst of you, and still has to like you. One or the other of the O'Kelly twins was usually chosen to be the Queen of May in our annual May procession honoring the Blessed Virgin. We all wore pastel dresses and had flowers in our hair, but they carried bouquets and were carried aloft, and no one doubted their aptness for the role.

They were not identical twins, and as such were not perfect. Maud O'Kelly was larger than Mary, but they were both very cute -- they were freckled and had curly strawberry blonde hair, they were stylishly chubby and wore matching smocked dresses with puffed sleeves. Later, Maud grew large and powerful, and might have become one of those Boediceas on the battlefield of field hockey, had her provenance been Scotland -- where such terrors proliferated -- rather than Ireland. Mary grew at the generally approved rate, and developed all the generally approved protrusions. I knew I was an outsider because I was neither a twin nor Irish; but in retrospect I can see that there were plenty of other good reasons for my isolation. Mary and Maud did not have pale blue glasses that attenuated with pathetic menace just above their eyebrows; nor did they have legs like bleached pipe cleaners; no one would ever have referred to them as Carpenter's dreams; and their mother did not speak with a French accent or wear French bikinis at the yacht club.

Thinking about them now, I realize how little I knew about them. I had assumed that if I had a twin she could know the worst things about me, the things I cannot utter for fear the earth beneath me will groan and crack open to swallow me up; my twin, however, would naturally know these awful things and therefore they could not, by definition, be ineffable. For I have come to assume that without all those unspeakable images and unknowable memories that clutter my brain, I would be a mentally healthier individual, a model of openness, untroubled by nightmares, unafraid of the confessional.

Because of the dearth of novices and younger teaching nuns, most of the Sisters of St Joseph at our school were ancient. In their multi-layered habits of black and more black, they shuffled through the halls like lost hippopotami struggling to emerge from funereal laundry piles. They were always hungry, and always forgetting where they stashed their secret foods. In the farthest reaches of Sister Jerome's desk drawer could often be found a rotting banana, and Hostess cupcakes, and all the insects who had come to attend upon them. They ruled our little parochial school like insecure despots: arbitrarily, illogically, imagistically. (Years later in Istanbul, when I heard the story of the slightly demented Sultan Mehmed II, who sat upon his upholstered windowseat in a tower of his seraglio in the Topkapi Palace, and shot at passers-by for target practice, thereby proving to himself, again and again, that he was all-powerful and not to be contradicted -- when I heard that story I suddenly remembered Sister Jerome, who of course didn't shoot anyone, but in her eighties had that same perverse need for reassurance that in her dementia lay her power.)

Fourth grade in parochial school was a watershed year for me. It was the year of Sister Jerome and the year I learned the exact location of our immortal souls. I was also the year I abandoned my ambition to achieve sainthood through becoming a nun. It was the beginning of the abandonment of saintly ambitions altogether, but I didn't realize that yet. My researches up to that time had been primarily in The Saints and Your Name, an inspirational book for children describing the lives and often gruesome deaths of the saints for whom they'd been named. The book described sixty-six saints, of which twenty-eight were women, and of those twenty-eight women, eleven were martyred. The clear advantage of martydom was the instant sainthood it conferred upon the martyree; but the Emperor Diocletian and his cohorts were no longer feeding Christians to wild beasts, and besides, I was squeamish about pain. More so back then then than now, but that's another matter. In later years I consulted the red-spined condensed version of Butler's Lives of the Saints which listed exactly three hundred and sixty-five saints, one for each feast day of the year, and came up with fifty-three virgins and fifteen widows and only four female saints who were neither widows nor virgins. Of course, Butler's was not exhaustive: he's very reticent about unverified or undocumented legends of martyrdom; for instance, he doesn't even include St. Ursula and her eleven thousand maidens, all gloriously martyred by the Huns on account of their adamant Christianity and virginity. In Attwater's compendium, a full third of the listed female saints are martyrs, and there are also a good proportion of mystics and visionaries. Anybody who knew the story of Bernadette, which was so popular at my school, had to at least consider the possibility of visions.

Still, in my most careful reading of the fourth grade, it became clear that there were really only two routes by which a girl achieved sainthood. She either stayed a virgin, did holy works, had visions and died young or perhaps was cruelly martyred trying to keep her maidenhead; or else she married, and her husband died so that she could be a holy widow, and preferably found a religious order, such as the Daughters of the Cross, or The Handmaids of Mary, or the Discalced Carmelites, or the Congregation of our Lady of the Retreat in the Cenacle. To confuse the issue, there was always my favorite, Joan of Arc, who -- although she technically qualifies as a virgin-martyr -- was an exception in that she got to dress as a man, go to war, and make a nuisance of herself to both the court and the clergy. But she is the exception that proves the rule. Sainthood appeared farther and farther beyond my reach.